Fashion is not something you typically find mention of in economic theory. For economists fashion makes no sense in either the domain of demand theory or as an interesting phenomenon in itself. However, economists may have missed upon a critical aspect of fashion as an expression of risk culture on the consumer side, or consumer-entrepreneurship.

Fashion defines a mechanism for an economy which is regularly flooded with new technologies. Just like recessions, it helps to periodically liquidate the capital asset positions. Hence its a process of refreshment for the economy. Fashion leads to a re-coordination of asset positions while allowing for an uptake of new technologies and significantly lowering the cost of structural adjustment. This process brings about productivity growth and ultimately leads to economic growth. Fashion provides an important trigger of incentive to learn about new things and to demand new goods. Fashion cycles are wasteful in an equilibrium economy due to the artificially induced depreciation of otherwise functional assets such as clothes, cars, and furnishings, which implies random demand shocks to certain producers and a loss of consumer surplus. Yet they may have an overall role that is welfare-positive in an evolving economy, due to their role in facilitating structural change on the consumer side.

For economists, fashion is: (a) an inherent but unfortunate part of the cultural and economic condition of man, which is due to negative externalities from social learning and status signaling; (b) bad, because it is wasteful, irrational, and destabilizing; and (c) not to be encouraged.

However, there are strong arguments for a positive valuation of fashion if one reconsiders the value of these destabilizing dynamics and their value in a world of plenty and uncertainty.

There are many reasons why people follow fashion. First, they do so to grab attention, as a form of social communication through commodity signaling and demand for novelty. Second, following fashion depicts a cognitive efficiency, a capability to economize on choices that are difficult or expensive to reverse. Third, it is fun, for those whose fashionable choices are most successful can become Carrie Bradshaw-s overnight.

Even so following fashion can still be messy and expensive, as fashion cycles cause the consumption abandonment of clothes, music, furnishings, appliances, cars, and so forth, long before those goods are physically worn out or fully depreciated. The practice seems like waste to the rational Adam Smith-s.

Yet, considered at the levels of an individual’s lifestyle and of the whole economy, this accelerated depreciation, which on a first look seems merely costly, in fact, is socially beneficial. In a world endowed with continual flows of new goods and technologies, and therefore with the presence of consumer mistakes where investments in physical or social capital are concerned, fashion may function as a mechanism that periodically and speculatively liquidates some elements of a consumer’s lifestyle. It makes room for new ideas to be adopted, and allows past mistakes to be mitigated. As cruel as life can be within a fashion cycle, failure is more a variety of experience than a terminal blow.

Fashion is a game played through multiple rounds; at the beginning of each, there is the opportunity to restack your deck in response to the cards played by others. It is best understood as the consumer side of entrepreneurship: a willingness to take risks and explore new consumer lifestyles.

In an evolutionary theory of fashion, the introduction of a novel fashion trend into an agent’s environment triggers a revaluation of their consumption strategies in the face of the novel stimulus. These new consumption strategies then form the basis of “latest” trends. As the fashion “fad” becomes normalized, its novelty element dissipates to the point where a newer stimulus can induce consumers to re-revise their strategies and the resources associated with the fashion depreciate in value. This depreciation creates new opportunities for producers and consumers to enter or re-enter the market for those resources. This process has important benefits for those consumers and producers who made bad investments in socially consumed assets in the previous fashion cycle. When a fashion cycle comes to an end, those who placed unfortunate bets during it are put back on a more nearly equal footing with those who were successfully fashionable. Fashion cycles may, therefore, play a significant redistribution role in society that redeems their wasteful, throwaway aspect, which conservatives and Marxists alike abhor. To be fashionable in the next cycle, fashion victor and fashion victim alike must pay the price of tooling up again in line with the latest trends.

Furthermore, there is also a physical resource redistribution which mitigates the seemingly wasteful “throw-away” aspect of fashion cycles. The accelerated depreciation of fashionable goods enables them to be enjoyed secondhand by consumer subcultures whose members could not hope to purchase the goods if their early rates of monetary depreciation only reflected their physical depreciation. Fashion thus promotes economic and social mobility on the consumer side.

The demand-triggering role of fashion cycles can promote economic growth. Rising incomes open up new consumption possibilities but, with them, new risk. A key problem for sustaining economic growth in affluent economies is that the disposable income might not actually be spent. The affluent consumer may have the ability to spend, but not the will to do so. Government need not step in at this point—it is better that fashion does, exerting the pressure of social competition to overcome such weakness of the will to consume, and helping to keep the economy closer to its potential growth trajectory.

Uncertainty about the dominant fashion- trend-of-the-season in a market is healthy for productivity growth, as it promotes experimentation. There is enough motivation to the producers to innovate as those who place their bets on the winning standard, and those who work out how to make their innovations win, by solving technological problems become fashion demigods. The game however has a role for producers and consumers alike. When a product goes out of fashion, its producers and past consumers are forced into problem-solving mode: they must decide what to replace it with. Although it is costly to liquidate or discard some of their assets, dealing with this setback is likely to result in them emerging with enhanced knowledge about how to make optimal production or consumption choices. Furthermore, since there is a defined gestation period between the end of one fashion cycle and birth of a new fashion trend, this can essentially serve as a time for experimentation. There are rich pickings to be bold and fearless, whether one is a consumer or a producer, given that there is the possibility of emerging a leader and also a “cleansing” mechanism possible in case of wrong choices. Fashion incentives thus translate into growth incentives.

It also involves the display of skill in making the right consumer choices, to avoid becoming a ‘fashion victim’ by failing to play along with a fashion rule followed by the majority. It can also involve unusual strategies that convey status as the result of signaling that one is part of a ‘hip’ minority with expertise and insight ahead of the field. The fashion-leading consumer thus has many of the capabilities of an entrepreneur, as an agent alert to gaps in markets and to new opportunities for constructing connections. The extent of entrepreneurship in consumption is widely overlooked in modern economic analysis, yet if consumers were not occasionally moved by the ‘animal spirits’ of such risk culture, economic growth would be more limited.

The full complexity of economic growth is therefore rightfully the province of fashion. That should at least suggest a re-evaluation of the significance of fashion in a liberal economy. Fashion is part of how economies evolve, not of how they decay. It is another name for consumer entrepreneurship: and the more we have of that, the better. 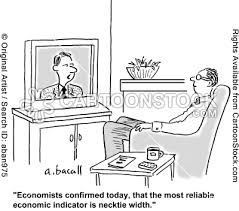 Tie shrinks in width as the economy shrinks

Increase in lipstick sales could indicate an impending slump

Why should Students Study Economics?