Macroeconomics is the branch of economics that studies aggregate level behavior and economic phenomenon such as Price level, inflation, unemployment, national income and output level and GDP growth rate, interest rate, money supply, exchange rate etc.  A course in macroeconomics can be taken at a beginner 101 level, intermediate level as well as advanced topics can be covered by taking study of macroeconomics at graduate school and universities level followed by research and specialization in several sub-domains of macroeconomics. Students of macroeconomics at various levels of study are typically engaged in a study of behaviour of macroeconomic aggregates and their principles such as national income accounting, determination of price-level in an economy through aggregate demand analysis, role of government through fiscal and monetary policy and stabilization programs, determination of interest rate in money markets, performance of financial sector, theories of economic growth, as well as aspects and policies related to international economics. The courses are typically taught through a combination of theoretical texts, graphs, charts, economic models, and data to analyze, describe, and explain economic concepts.

Here is a list of top 10 books on Macroeconomics that are favorites with students of macroeconomics classrooms around the globe. 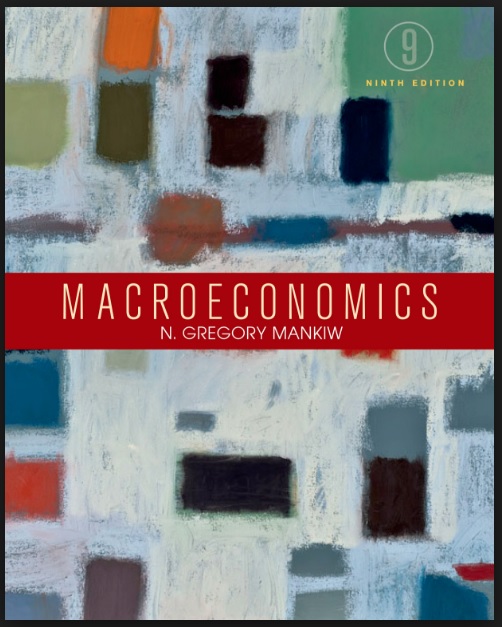 1. Macroeconomics by Gregory Mankiw, Worth Publishers

The book by Mankiw is a favuorite amongst students of macroeconomics courses at beginners 101 level because of the simplicity with which Mankiw explains even the toughest concepts of economic policies. This book on macroeconomics is a widely referred text at beginners level to teach concepts of national income accounting and determination of national output, GDP, GNP as well as growth rate of output. The book vividly describes phenomenon of inflation and unemployment as well as their measurement aspects. The standard economic models such as Keynesian model, multiplier, monetray policy, fiscal policy, AD-AS model are explained in detail with well-described economic models and diagrams. The book does not lean heavily on mathematical analysis and is best for 101 courses as well as students of other disciplines with o prior knowledge of economics. 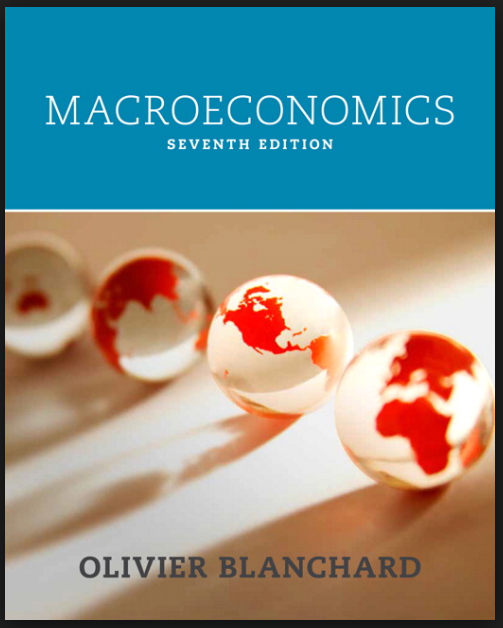 This book on macroeconomics by Blanchard is an excellent reference text for intermediate courses in macroeconomics. The book does an excellent job of establishing connection between the goods market, the labour market and the financial markets as well as in short run, medium run and long run analyses. Blanchard offers a seamless transition from Demand side analysis of Keynesian and IS-LM views to supply side analysis of Phillips curve, natural rate of unemployment and Okun’s law.

Further there is also a section for in-depth analysis related to critical analysis of recent economic crisis as well as role of monetary policy in the United States, the problems of the Euro area and growth in China. The book also comes in bundle with MyEconLab® that offers online homework, tutorial, and assessment program for students to work on while reading this textbook. The personalised study plans as well as assessments are an excellent way for students to text their understanding of theoretical concepts as well as to apply them in critical analysis of real-life macroeconomic problems. 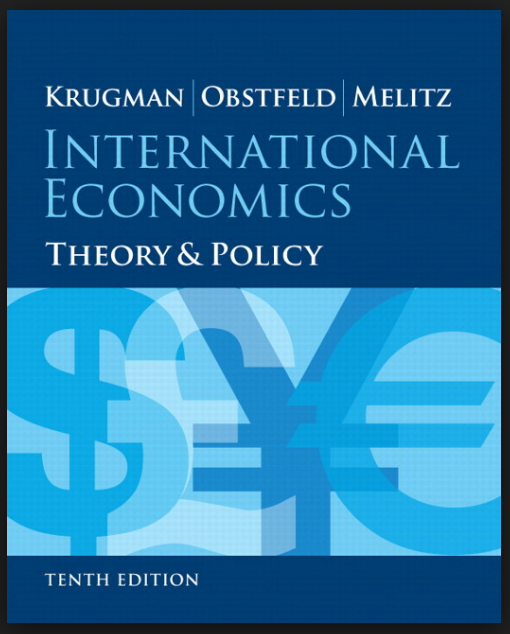 The book starts off by presenting an overview of the World Trade and then goes on to deal with trade models such as the Labor Productivity and Comparative Advantage concepts of the Ricardian Model, the Heckscher-Ohlin Model,  the Standard Trade Model, impact of External Economies of Scale and the International Location of Production, aspects of export decisions, outsourcing, and multinational enterprises followed by a discussion on the instruments of trade policy with a brief highlight on the political economy of trade policy as well as controversies in trade policy with special focus on trade policy in developing countries. The macroeconomic aspects of international trade and finance are dealt with by a national income accounting based introduction to concepts of balance of payments. The discussion on exchange rate and foreign exchange markets is based on an asset approach using Fisher conditions of purchasing power parity. The AA-DD model on money, interest rates and exchange rates is covered in a detailed manner with discussions on price levels and exchange rates in the Long Run as well as Output and the Exchange Rate in the Short Run. Macroeconomics of the fixed Exchange Rates and Foreign Exchange Interventions including impossible trinity, dirty floating exchange rate, optimum currency area, are also analysed from policy view. A book also provides a chapter detailing the historical international monetary systems such as the gold standard. Recent international trade crisis such as Subprime crisis, Latin American crises are dealt in chapter of financial globalization. 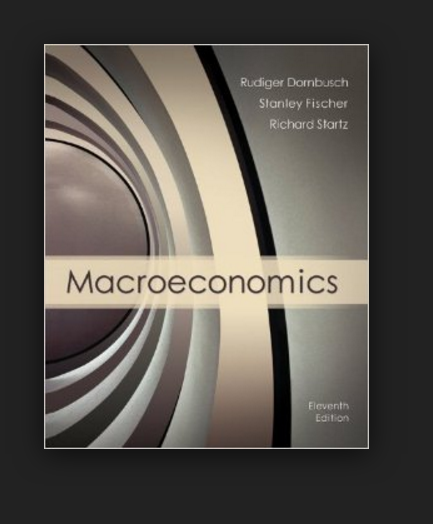 Dornbusch, Fischer, and Startz is another macroeconomics favorite textbook and one of the most widely used intermediate macroeconomics textbook. The textbook is not leaning towards any particular Macroeconomic school of thought and provides a wide coverage of all macroeconomics thoughts. Concepts and theories of macroeconomics are demonstrated through economic models.  The book is best suited for readers who have taken a beginner’s course such as principles of macroeconomics. The book covers National income accounting for United States of America, Economic Growth models and concepts of aggregate supply and demand as well as accumulation and policy implication for growth.

The aggregate supply side analysis deals with wages, prices, unemployment and Phillips curve for relationship between inflation and unemployment. Keynesian model of income and spending, consumption, saving, investment spending, money, interest and income and implications for monetary and fiscal policy are also dealt in detail.  Money demand, money supply, role of Fed as well as international economics, economics of depression, hyperinflation and deficits also are discussed as separate chapters. The book is also an excellent resource for developing clear understanding of Mundell-Flemming model as well as Dornbusch Exchange rate overshooting model. 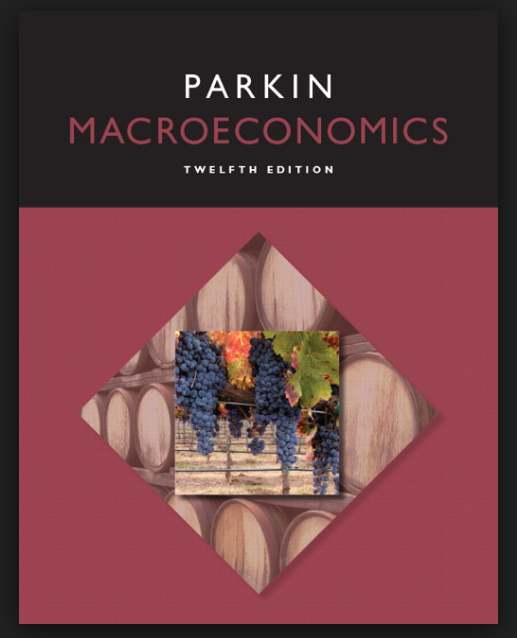 Parkin’s Macroeconomics book is widely-read across leading universities of the world, especially in universities of Australia. The book is also supplemented with MyEconLab® mastering packaging and with Pearson e-text package. The book is an excellent lead for a beginners Principles of Macroeconomics course for building an intuitive approach in students to think in the way economists do. The book contains real cases, latest policy prescriptions and data as well as real-world applications based on global economic issues. Prof Parkin has introduced each new concept through a real-world issue to emphasise application oriented thinking and bring clarity to students regarding economic events of daily life. The MyEconLab package that is supplemented with the book is an online homework, tutorial and assessment program based on this book. So once students have conceptually learnt a topic from the book, they can then test their understanding and application skills through online practice tests and homework questions on MyEconLab. This will help students to understand and retain the concepts of macroeconomics. 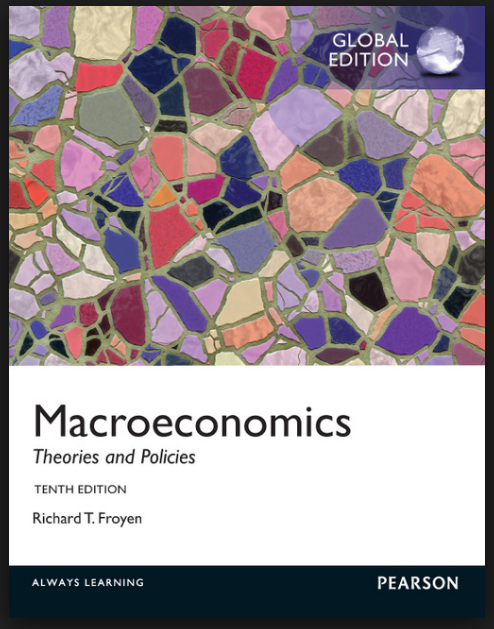 Froyen’s book does a great job of highlighting the origin and history of macroeconomics. The book chronologically tackles the evolution of various schools of macroeconomic thought over the years. Froyen’s book bring out macroeconomics as a living being and describes how the policy-making and underlying economic models have changes in response to the technological, cultural and socio-political environments. The models have been explained in simple, self-explanatory ways which makes it easy for even beginners to understand macroeconomic theory from this book.  The book is also a great resource for students from non-mathematical backgrounds who are looking to understand macroeconomic theories without advanced calculus/dynamic programming based approaches. Most problem solving is based solely on simple tricks of algebra and graphical analysis. The book is great resource for beginners in Macroeconomics, especially for understanding Classical model, Keynesian aggregate demand model, IS-LM model, monetary policy and fiscal policy analysis, open economy macroeconomics of exchange rates, international monetary systems as well as inflation, unemployment and aggregate supply analysis. 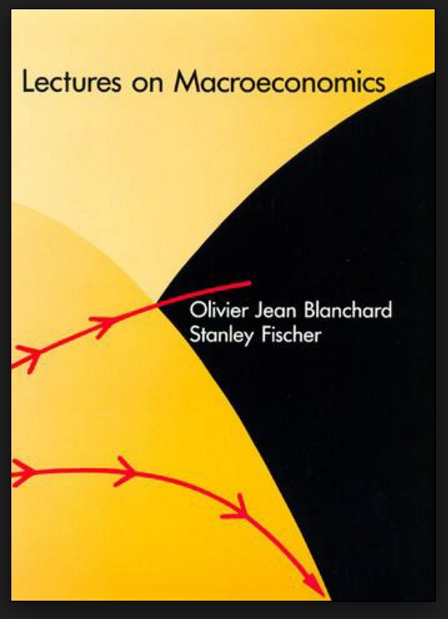 7. Lectures on Macroeconomics by Olivier Jean Blanchard and Stanley Fischer

The book by Blanchard and Fischer is a biblical text for students of basic and intermediate macroeconomics classes. The book’s quest is to highlight the macroeconomic principles underlying persistent long term economic growth along with models on what causes fluctuations in the movement of output, prices and unemployment. This book is often revered as a starting text for understanding optimization and growth models, inter-temporal models and OLG models with money, concepts and theories of consumption, investment, asset pricing, bubbles, stability and multiple equilibrium, nominal rigidities, competitive equilibrium business cycles, aggregate labour demand and supply, credit markets, monetary and fiscal policy etc. 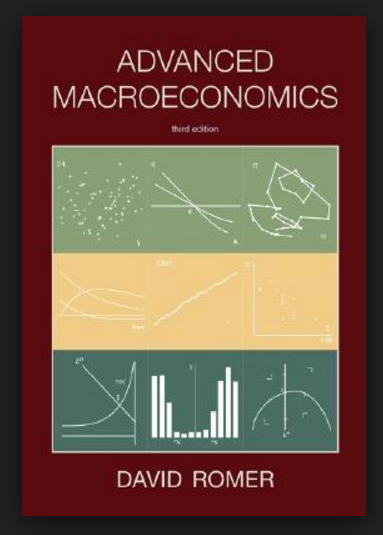 David Romer’s Advanced Macroeconomics, is a standard graduate textbook of macroeconomics utilised by macroeconomics teachers throughout the world. The textbook rigorously covers essential aspects of macroeconomic modelling, especially in domains of economic growth and monetary policy. The end chapter exercises contain mathematical problems of macroeconomics theories and models that are essential for developing a sound thinking on how these theories can be applied. The books contains discussion on topics such as Solow Growth model, Ramsey Cass Koopmans model, diamond model, endogenous growth models, aspects of cross-country income differences, real business cycle model, nominal rigidity, dynamic stochastic general equilibrium models, consumption under certainty(permanent income hypothesis) and consumption under uncertainty(random walk hypothesis) , model of investment and Tobin’s q, efficiency wage model, Shapiro Stiglitz model, Inflation, Money Growth, and Interest Rates, Ricardian Equivalence, debt accumulation and model of debt crisis. All the models are explained with mathematical rigour and are later tested for understanding with moderate to tough difficulty level end-of-chapter exercises. The book also features an Epilogue on the financial and macroeconomic crisis of 2008 and beyond. 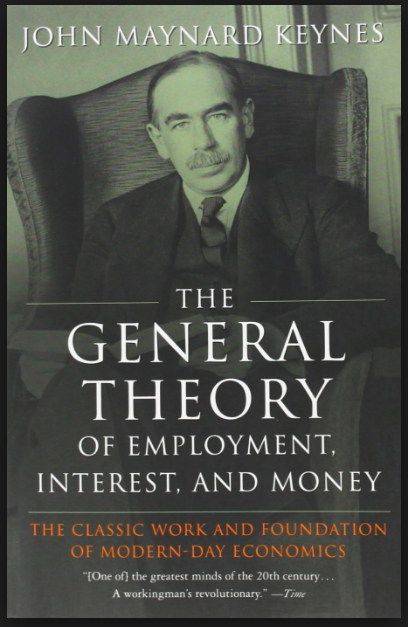 This book is the magnum opus of John Maynard Keynes who is credit with establishing macroeconomics as a separate branch of study from microeconomics. The book is set in the period of the Great Depression of 1929 and highlights the problem of Stagflation and the deficiencies of classical economists and Say’s law in getting the economy out of the great depression. Keynes has neatly put up his treatise with first two parts containing an explanation of classical economics and the economic concepts fundamental for understanding his own “Keynesian” economics. In the third, fourth, fifth and sixth parts of the book Keynes has elaborated on the principles of Keynesian economics relating to Consumption, Investment and interest rate, Money-Wages and Prices, and some short notes.  The book is an important economics book which brought forth the ideas of the consumption function, the multiplier, expectation as determinant of output and employment, marginal propensity to consume, marginal efficiency of capital, liquidity preference theory as well as effective demand. Keynes has also analysed these principles of wages, employment, money, interest rate and prices through understanding of human behavior and psychology. The writing may seem a little tougher for anyone lacking a background in basic principles of economics as the book was originally intended for professional economists of 1930s Britain. However, the textbook is widely acclaimed as a must read book for students of economics, all round the world. 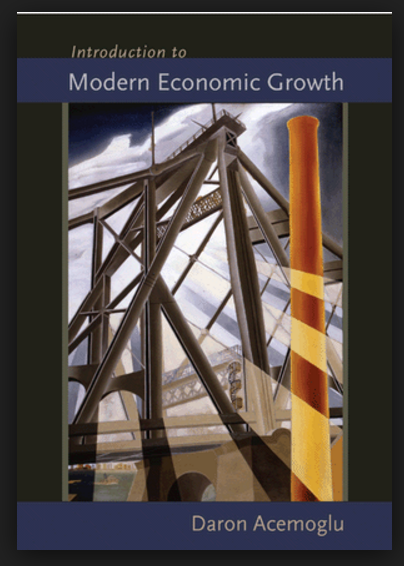 Daron Acemoglu is an acclaimed economist who also wrote Why Nations Fail: The Origins of Power, Prosperity, and Poverty. The Modern economic growth book provides insights about puzzles of economic growth and macroeconomic problems of developed and developing nations around the world, especially applications of growth theories on aspects of growth and divergence.