Malaysia is a country located in southeast Asia. Malaysia is becoming a popular choice for the students all over the world. Universities in Malaysia have a strong existence in global rankings. Some top-ranked universities are located here. This is the great place for doing Bachelor’s, Masters and PhD programmes. The one of the main reason is the cost-effective and high-quality education that attracts the students. 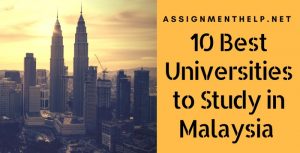 Here are thus 10 Top Universities of Malaysia to study for the International students:

This university is considered to be the highest ranked and one of the ancient universities in Malaysia. The student’s population is around 17,580 that initially includes over 3700 international postgraduate students. This university is initially growing its multidisciplinary reputation by appearing in the global top 400 for 28 out of 48 possible subjects that were initially covered by the QS World University Rankings by subject 2017 and these initially included positions among the world’s top 50 for the development studies, mechanical engineering and the electrical engineering.

This university has always continued to be on the top and have improved in the 2018 rankings as well from 270th rank to 229th and is still considered to be the second highest ranked university in Malaysia that is located in Serdang and is considered to be one of the country’s leading research universities, that was originally founded in the year 1931 as the school of agriculture. This legacy was reflected specifically in the performance of the subject rankings initially and out of the 19subjects in which this university was initially ranked internationally and now it appears to be on the top 100 for forestry and agriculture.

However, this University is basically situated in Bangi place located in Selangor and is approximately 35km away located in south Kuala Lumpur city centre. This university is ranked as a joint 230th position in the world. It hosts a student community of around 27,000 the school boosts particularly strong programs in this field of politics, education, law, engineering and The University Kebangsaan Malaysia is initially been called a graduate school as well because of its main campus and at the same time, it is known to be a medical school that is initially located in the suburb of Cheras including a branch campus within the capital.

This University was initially established in the year 1996 and was considered to be the first private university with the two campuses. It produces 30,523 graduates at a time and according to the recent survey demonstrates out of all these 91% of these are initially the secured employment within 6 months of the completion of studies. It is considered to be the outstanding pool for the international students numbering up to 4200 from out of 77 countries in particular. In this University the students can consistently score the top placements in the national business plan competitions and there are around 100 campuses student groups.

This University was established in the year 1983, May 23rd. It is considered to be one of the public institutions of higher education in Malaysia and this University is however sponsored by the eight governments from the organisation of the Islamic Conference and it does offers bachelors degree with a masters degree and also PhD courses for around 13 faculties also called as Kulliyah. After it is established as after 4 years around 60,785 graduates and postgraduates have been successfully completed their academic studies and out of this, around 53,241 belong to Malaysia while the rest 7,530 were the international students. It initially includes all the graduates across the globe and it has been established alumni chapters in Thailand, Indonesia, Australia, Maldives, Herzegovina, Oman & Singapore. Branches of the alumni chapters have also been opened at the same time in China, Yemen, Brunel, Sri Lanka, Gambia, Bangladesh, Nigeria etc.

This University was established in the year 1984 and the month February 16. It is considered to be the first University in the country that has been fully wired that too using Fibre optic cables. It initially has 29 computer laboratories in the administrative and academic buildings on the campus and it offers students with the access points for the e-services at the same time. It boasts up to 3 graduate schools that initially include Othman Yelp Abdullah Graduate School of business, A Wang had Salleh graduate school of arts and sciences and Ghazali Shafie Graduate School of government. Some of the academic schools that this University includes subjects like Business, Economics, accountancy, finance & banking, Social development, quantitative sciences, technology and communication etc.

This University has established in the month 24th December and the year 1992. It is considered to be the 8th Malaysian University and was established just after the declaration of vision 2020. However, this University consists of around eight faculties, seven centres and three institutes. Total enrolment of this university was around 16,085 consisting of 14,033 undergraduate students and 1343 postgraduate students and also 709 pre University students and apart from this, a total of 2,189 staff have initially been employed in August 2013. It is also considered to be an ISO certified University that granted the prestigious MS ISO 9001:2000 certification only for excellence and for its core management processes.

It was started in the year 2016 and do offer most of the undergraduate courses basically in finance and business management and more subjects like Psychology, Quantity Surveying and real estate and also MBA only through Henley Business school.

assignment help: answers to all your queries related to studying in UK