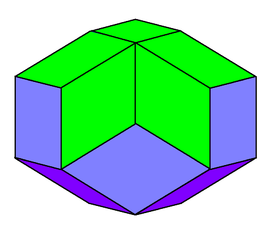 Rhombicicosahedron was discovered by Fedorov in 1885.

It belongs to a family of isohedral rhombic polyhedra that consists of prolate and obtuse rhombohedron. It is a convex polyhedra.

A Rhombicicosahedron with edge length  ‘a’ has Surface area and Volume as :